The Lord said he was a man after his own heart.

1st Chronicles 29:26-28 “26 David son of Jesse was king over all Israel. 27 He ruled over Israel forty years—seven in Hebron and thirty-three in Jerusalem. 28 He died at a good old age, having enjoyed long life, wealth and honor. His son Solomon succeeded him as king.”

Dying “at a good age” means an age that was lived to the fullest and to an age where it was obvious, that God was with him. What about the part at the end, wealth and honor. Well he had all the spoils of war, and was very wealthy. Keep going, what is that H word?

I just got done studying the life of David, reading through Chronicles, and Samuel. The story of David and Goliath in our book we read inspired me to dig a little deeper. I love reading about war, epic battles, elite warriors, and super humans. 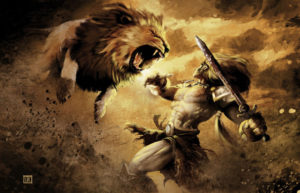 People followed David. God made sure of that, because he was chosen for a purpose. Warriors are drawn to warriors. David had pride in his elite army, and being able to conquer anyone the Lord gave him to fight. But just a couple chapters earlier we read in 1st Chronicles 21, towards the end of his life, this pride was ultimately his downfall. He wanted to know just how awesome of a King he had become, and know how many fighting men he had in his army. This pride was the one item the Lord just could not take. See, David had the Lord God on his side, maybe he didn’t have the numbers of the most skilled warriors, or the best weapons; On the human score card, he should not have attacked some of the cities he did. Using our means of evaluation and decision making, is not God’s way.

You have what it takes to honor God. After all, he is your confidence, your rock, your redeemer. But in chapter 21, of David’s weakness, he did not honor God. That got me thinking, what about honor is so important? I think David was a man after God’s own heart, because he showed honor through obedience his entire life. So when he let his guard down, and let the enemy influence his mind through this act of a Census, that was the sin that angered God. Spreadsheets are not bad, but to have a burning desire to count our treasures and then RELY on our numbers, that feeds the pride, and that leaves God out of the equation.

You can choose to have a pursuit of honor: maybe it’s your patriotic duty, the heritage of your family, you can respect your elders, love your wife, do things the RIGHT way. Whatever your doing, you can continually honor God. But don’t do it because I said so. Colossians 3:23 Whatever you do, work at it with all your heart, as working for the Lord, not for human masters, 24 since you know that you will receive an inheritance from the Lord as a reward.

If honor is a reputation worthy of respect and admiration. You can then give honor to your peers and elders, and you can receive honor from others. Rightly so, David had the honor of his people, honoring his faith heritage, and humbling himself before God in obedience.
I think to sum it up for me…I just need to keep, ‘who I am seeking honor from’ in check, and remember to Honor God in everything I do. God is the one I want to put first.